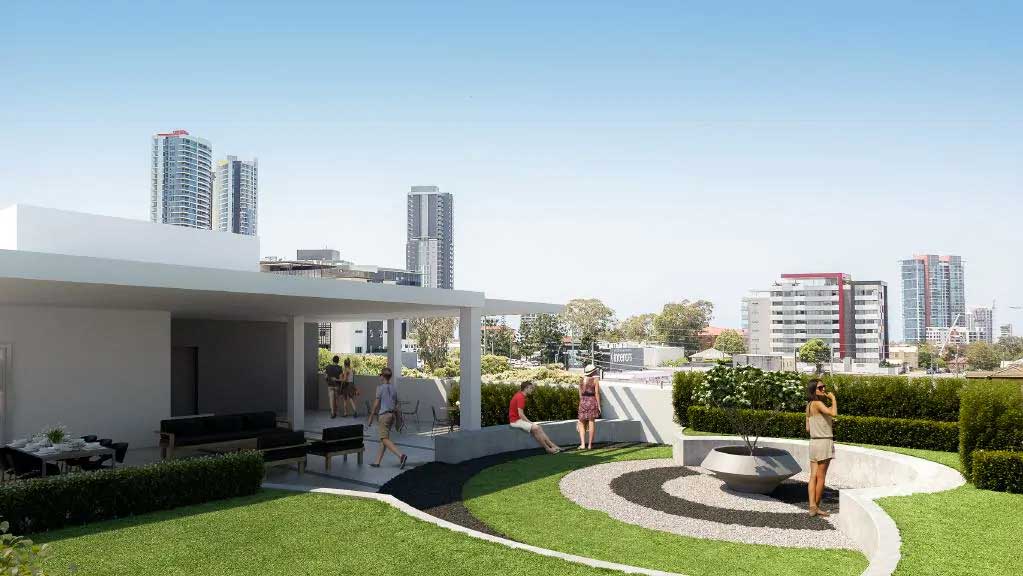 THE traditional backyard barbecue area is being reimagined as Gold Coast developers look to lure buyers to apartment living.

Few current residential towers on the Coast boast rooftop gardens but that’s about to change with projects Rise, Rhapsody, Aura, Brooklyn and SpenDeLove Residence all set to include the communal feature.

“There are some great examples of areas that have been developed on the roofs and include pools, gardens and recreational spaces,” Mr Gillan said.

“On the Gold Coast and (elsewhere in Queensland), we have produced some really good spaces on the tops of podiums with the tower going above that. But there has been a trend for a little while to add to the rooftops where it’s appropriate.”

DP Project Marketing principal Deborah Provost is delighted Coast developers are catching on, with such spaces making a “huge impact” on marketability. “In Australia, we always live in big spaces and have a barbecue in the back yard and a pool,” she said.

“With people moving out of the suburbs into high-density areas, we need to create that kind of back yard barbecue place for them.
“Rooftops have all of the views of the Gold Coast skyline and provide a European-type feel. “(Developers) are having to bring something to the table that people want and they are listening to them. “People want to be able to socialise and relax in a garden and they don’t want to be at ground level with no outlook.”

Ms Provost noted the lengths developers Ho Bee Land Limited went to in making Rhapsody an attractive proposition, with a lounge, gymnasium and terrace on the 27th floor in addition to a rooftop garden and terrace on level 41.
“That developer compromised over $4 million worth of gross realisation on what he could have sold on apartments and gave the entire 27th level up to facilities.”
Rex Wang, who has bought a 26th floor holiday unit in Rhapsody, said the building’s communal spaces gave it a “comfortable feel”.

A Zen garden “sanctuary” is marketed as a key feature for Southport-based project SpenDeLove Residence.
“The idea of a green haven in Southport with a backdrop of the Broadwater, Surfers Paradise and the Hinterland has been very appealing to owner-occupiers and investors,” said Josh Pagotto of LJ Hooker Development Services.